Since the early ’90s Gullvåg has developed the painting towards what we still view as his foremost hallmark: A certain voluptuous baroque style, where the motif is sketched in sharp colours against an almost always night-black background. The motif’s figuration is brutally fractured, as if viewed in a broken mirror. This creates a strong dramatic effect and helps underscore a theme that will come to receive increased attention in Gullvåg’s art; the transience of being. The moment is irrevocably gone; it exists only as a vague memory, perhaps supported by photographs or preserved objects. Disquiet takes a central place in his pictures.

Childhood still provides an important source for inspiration, but eventually we see how the artist’s own children are woven into the circle of motifs. In these pictures, children’s adventures and experiences function as a means for further progress and actualisation – a corrective for Gullvåg’s own childhood.

How Gullvåg began to work with graphic art has its point of origin in a larger cycle of paintings over the theme of Knut Hamsun’s novel Pan (1894), which the artist developed on his own initiative. When Den Norske Bokklubben heard of this project, it wanted to create a jubilee-publication marking the 100 years since Pan first was published. And based upon his solid preparatory work, Gullvåg agreed to create a Pan-portfolio in a technique he as yet was unacquainted with, lithography. Rather quickly fine art printing was incorporated into his artistic practice, and in recent decades he has had a rich production.

From the mid ‘90s we see a clear rotation towards two areas that for many years have been neglected by Norwegian contemporary art: liturgical art and portraits. Since 1995 Gullvåg has accepted commissions entailing several larger pictorial programs for churches throughout the country, and distinguished himself as one of Norway’s foremost creators of liturgical art. Parallel to this, he has also distinguished himself through his portraits of well-known Norwegians, such as Lucy Smith, Rolv Wesenlund and Arve Solstad.
HÅKON GULLVÅG © / TEXTS BY DANIEL JOHANSEN AND EVA FURSETH / SITE BY KLIPP OG LIM 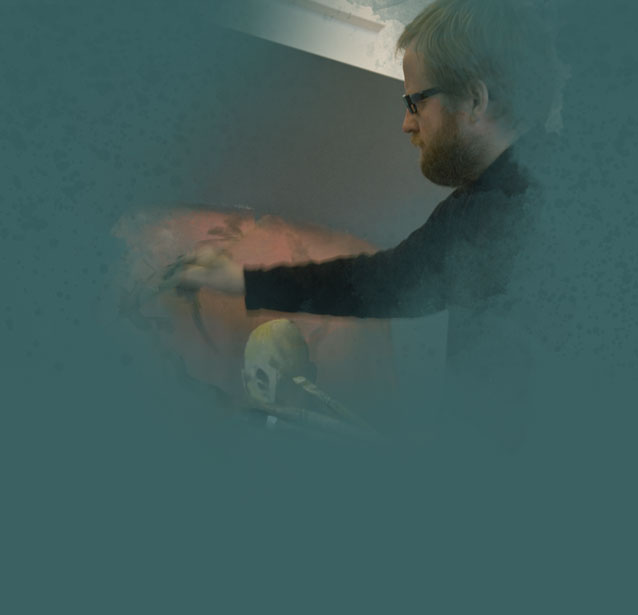